Can You Sue for a Rear-End Motorcycle Collision?

Rear-end collisions are among the most common accidents on the road today. When two cars are involved in a low-speed rear-end collision, it’s usually no more than an unpleasant distraction where both parties walk away with some minor angst. With motorcycle accidents, however, the danger increases exponentially and the damages can be quite serious even at low speeds.

Of course, you can sue if you’re rear-ended on a motorcycle. The real question is: is it a practical thing to do? Well, that all depends on the negligence of the driver who hit you and the likelihood of recovering damages. Since most rear-end accidents are the fault of the one who did the rear-ending, you may have a case.

If your motorcycle is rear-ended by a car and you’re near the Tampa area, filing a lawsuit is certainly an option, especially if the other driver is negligent. Contact a Tampa Personal Injury Lawyer as soon as you’re able for a free consultation to determine your legal options.

There are many reasons that the driver who rear-ends someone else is usually at fault.

There are many more reasons covered under Florida Statute 316.306. When you get rear-ended, however, it almost always boils down to the driver in the back not allowing enough distance in-between to avoid accidents. In most cases, experienced motorcycle accident lawyers can ensure the rear driver is held liable for causing the crash.

The way the law sees it, no matter what caused the accident, the fact that there wasn’t enough time to stop is usually an indicator of the negligent driver not allowing enough space in between vehicles. 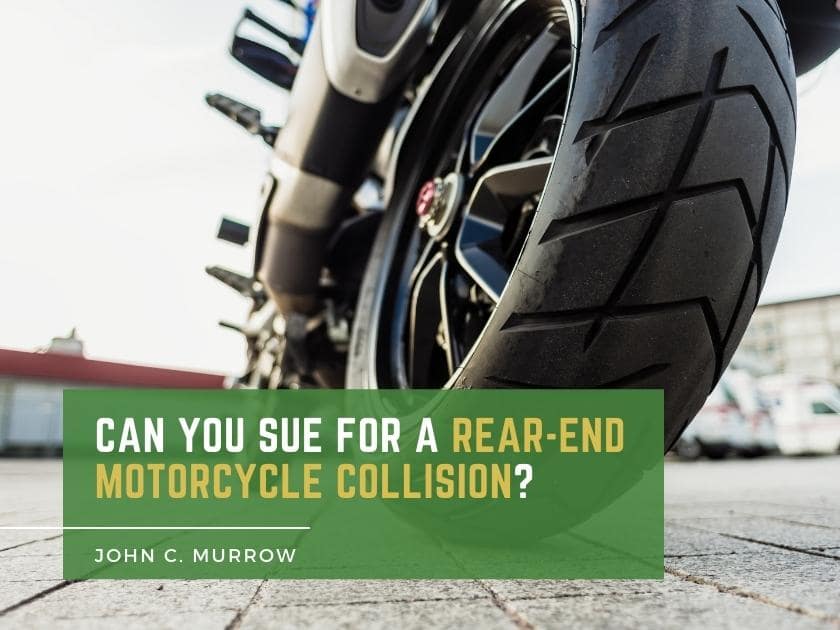 The first and most obvious factor is the fact that a motorcyclist is completely exposed. Impacts with larger vehicles are always dangerous,  but the lack of protection on a motorcycle makes severe injuries and even death more likely. Even a large bike is no match for even the smallest of motor vehicles. The risk for injuries and death skyrockets when you’re on a motorcycle.

You’ll often see someone on a motorcycle pull off to the side of traffic at stop signs and stoplights. What you’re seeing is a motorcyclist who is keenly aware of their surroundings and understands that drivers often don’t pay attention and are slow to react.

There’s just not much in the way of protection for those who choose to ride motorcycles. They achieve a great deal of freedom, are out in the open, can enjoy the day, and have greater mobility, all at the sacrifice of the safety features you take for granted inside of a vehicle.

Striking the rear of a motorcycle can lead to multiple, dangerous injuries where the rider can get crushed between vehicles, thrown into the air, or even trapped beneath your vehicle or the one in front.

Since there are no airbags, there’s nothing between a motorcyclist and hundreds of pounds of moving steel and glass. Their impact injuries are likely to be severe if they are struck hard enough and with enough velocity.

Most of the expenses that a motorcyclist is going to have to endure are medical expenses. Insurance may cover the cost of the bike—after the deductible, of course—and it may cover much of the medical expenses for the injured motorcycle rider, depending on how severe the injuries are and the extent of the hospital bills. You may seek compensation for common injuries and expenses including:

Of course, there’s only so much that you can cover in a single article and there may be many other losses when it comes to rear-end motorcycle accidents, especially considering all of the complexities and intangibles that are often involved when there are serious injuries. In cases of extreme negligence, juries may even award punitive damages, which is monetary compensation that exceeds the losses actually suffered and is intended to send a message.

If the negligent driver doesn’t have insurance, your own coverage can potentially be stretched pretty thin as well. One thing is for sure, there’s always a limit on coverage and medical bills are entirely capable of outpacing that coverage.

If you happen to be a motorcycle driver who was rear-ended, and your coverage is limited, filing a lawsuit is one of the best available avenues for you to claim compensation. 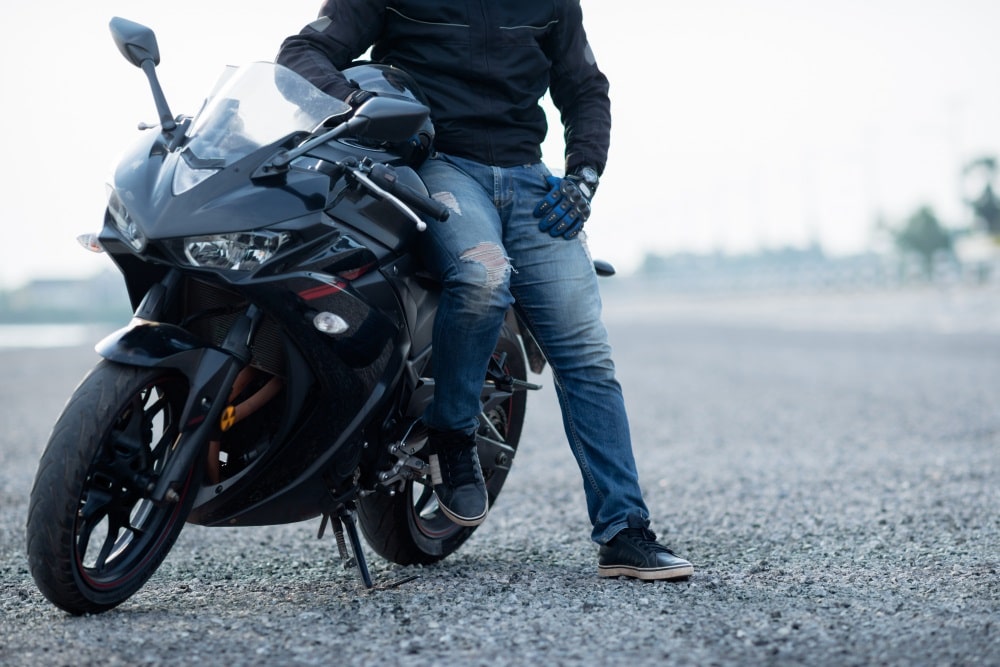 In the vast majority of cases, the driver who rear-ends a motorcycle is going to be liable for all of the damages caused by the wreck. You may think that a rear-end motorcycle accident is a slam dunk when it comes to determining fault. However, that is not always the case.

There are a few scenarios in which the rear driver will argue that the motorcyclist’s negligence contributed to the accident. For instance:

Even in these circumstances, the rear driver is liable to share in the negligence for the exact reasons aforementioned, that the following driver didn’t allow for enough room to properly react and avoid the crash.

Determining liability is important because Florida uses the “pure” negligence rule when it comes to accidents, even when you are hit from behind. During a claim, a jury may decide that the negligent driver was 75% at fault while you are 25% at fault, which would reduce monetary compensation by 25%.

In rear-end crashes, it's usually pretty easy for an attorney to establish damages, but you want to have any of your own potential negligence to be reduced as much as humanly possible and that’s why you need an outstanding personal injury attorney. Strong legal counsel will ensure you get the compensation you deserve.

Is the Person Who Rear-Ends Always at Fault?

Not always, but often the general understanding the following vehicle should have enough distance in between itself and the leading motorcycle is going to hold at least some sway.

The lead vehicle—motorcycle in this instance—can be held as the negligent party for reasons listed above, such as suddenly slamming on the brakes, driving erratically, or having no working taillights.

Because of how Florida treats liability, it's imperative to have a solid personal injury attorney on your side. Knowing the complicated intricacies of Florida traffic law is not something that you’re going to be able to absorb on your own.

You’ll need someone with years of experience and expertise and who has a proven track record of taking care of personal injury claimants in Florida courts.

The statute of limitations on motorcycle accident lawsuits in the state of Florida depends on the situation you are suing for.

As you can see, it may be different according to the circumstances that caused the accident and even whether the responsible party is a private individual, a government entity, or a product manufacturer.

Once your emergency medical needs are taken care of, your next step should be to contact Personal Injury Attorney John C. Murrow. Not only are you under a time constraint, but you also need someone who can navigate the law and get you the compensation you deserve.

The blog published by John C. Murrow Law is available for informational purposes only and is not considered legal advice on any subject matter. By viewing blog posts, the reader understands there is no attorney-client relationship between the reader and the blog publisher. The blog should not be used as a substitute for legal advice from a licensed professional attorney, and readers are urged to consult their own legal counsel on any specific legal questions concerning a specific situation.

After the car accident, your body hurts, you can’t work, you have numerous questions but don’t know what to do. Consulting attorney John C. Murrow can answer those questions.

We have experience in both commercial and recreational boating accidents. Whether you, or a loved one, are injured due to a boat operator’s negligence, or any other reason – we can help.

Slip and Fall accidents can happen when one least expects it and can result in severe injury. Every case is different and we can quickly determine whether a compensable claim exists.

Like motorist and boating accidents, cyclist and pedestrians are susceptible to injury from other motorists often resulting in serious injury. Please contact our office for a free consultation.

Motorcycle accidents can cause minor to severe injuries and often death. If you, or a loved one, have experienced a motorcycle accident it is important to have legal representation immediately.

Often, policy holders think there is no recourse when the insurance company denies or underpays the claim. Call our office for a free consultation regarding any insurance dispute.

If you have been injured by an unsafe product, you may have a case against those who designed, manufactured, sold, or furnished it. We will pursue the best potential recovery.

John C. Murrow is one of the pioneering attorneys for assisting windshield repair and replacement businesses against insurance companies so the windshield business is paid fairly.

Florida law gives surviving family members the right to bring a legal claim against the liable party under the Wrongful Death Act. John Murrow works with families while in their darkest hour.

4856 W Gandy Blvd, Tampa, FL 33611
© 2021 John C. Murrow, P.A. Law | All rights reserved.
We use cookies on our website to give you the most relevant experience by remembering your preferences and repeat visits. By clicking "Accept All", you consent to the use of ALL the cookies.
Cookie SettingsPrivacy PolicyACCEPT ALL
Manage consent

This website uses cookies to improve your experience while you navigate through the website. Out of these, the cookies that are categorized as necessary are stored on your browser as they are essential for the working of basic functionalities of the website. We also use third-party cookies that help us analyze and understand how you use this website. These cookies will be stored in your browser only with your consent. You also have the option to opt-out of these cookies. But opting out of some of these cookies may affect your browsing experience.
Necessary Always Enabled
Necessary cookies are absolutely essential for the website to function properly. These cookies ensure basic functionalities and security features of the website, anonymously.
Functional
Functional cookies help to perform certain functionalities like sharing the content of the website on social media platforms, collect feedbacks, and other third-party features.
Performance
Performance cookies are used to understand and analyze the key performance indexes of the website which helps in delivering a better user experience for the visitors.
Analytics
Analytical cookies are used to understand how visitors interact with the website. These cookies help provide information on metrics the number of visitors, bounce rate, traffic source, etc.
Advertisement
Advertisement cookies are used to provide visitors with relevant ads and marketing campaigns. These cookies track visitors across websites and collect information to provide customized ads.
Others
Other uncategorized cookies are those that are being analyzed and have not been classified into a category as yet.
SAVE & ACCEPT